The Romans are often cited as having built a lighthouse at Ostia, but statements such as this are inaccurate. In fact, there was an ancient lighthouse, close to Ostia, and modelled on the Alexandria Pharos, at Portus Romanus, the port that served ancient Rome.

Salt was probably extracted from salt pans situated to the east of Ostia, in the Middle and late Bronze Age (1400-1000 BC), and there may have been a small village near these salt-pans in the early Iron Age (1000-700 BC). According to ancient tradition, Ostia was founded in the late seventh century BC by the fourth king of Rome, Ancus Marcius. So far, however, no archaeological remains have been found in or near Ostia dating from this period. Clearly, its location at the mouth of the River Tiber made Ostia the natural place for merchant ships to offload their cargoes for the journey to Rome, but ships with a deep draught found it difficult to berth in Ostia itself because there was a sand bar at the mouth of the river and silting made it difficult to moor alongside the quays. Many ships were forced to offload their cargoes into smaller vessels that could bring them ashore more effectively, but this was not a long-term solution. 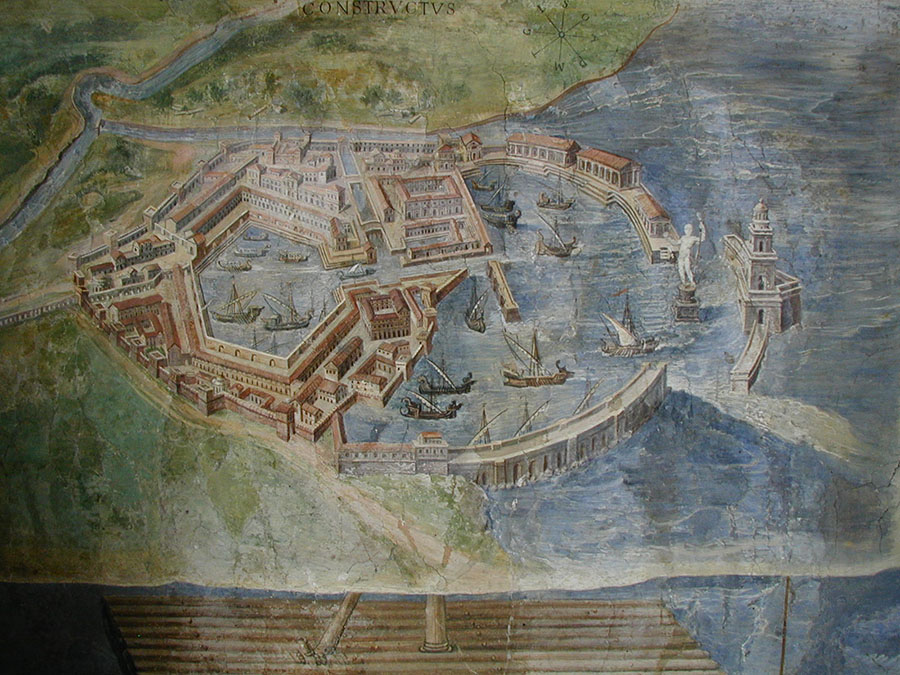 Picture of Portus Romanus in the Gallery of Maps, Vatican Museum [Ken Trethewey, 2003]

By 42 AD, Rome had outgrown the capacity of Ostia to supply it, and emperor Claudius began the construction of a new harbour a few kilometres north of Ostia. Part of the method of construction, it is said, was to fill the hulls of old ships with concrete and thereby sink them to form two jetties (moles) at the north and south of the harbour. The wide entrance to the harbour was partly filled by a third (isolated) mole on which was a lighthouse. Suetonius tells us that Claudius “built upon piles a very lofty tower, in imitation of the Pharos at Alexandria on which lights were burnt to direct mariners in the night” [Suetonius, Claudius XX]. There seems to be no doubt about the existence of this lighthouse, since it is written about extensively and depicted on many mosaics, in drawings, on reliefs, on funerary slabs, and on coins. Any doubts must surely now have been dispelled with early 21st century archaeological evidence, reported elsewhere. [www.ostia-antica.org]

From the harbour, a channel, thought to be 45 metres wide, was created to join the Tiber. It was known as the Fossa Traiana (after Emperor Trajan) although it was actually constructed by Claudius. This Fossa made the land between it and the Tiber at Ostia into an island called the Isola Sacra. Barges towed by oxen could now shortcut the silted section of river at Ostia and transport goods offloaded directly from the harbour to Rome. Coins celebrating the opening of the new port were issued by Emperor Nero in 64 AD. The harbour was called Portus Augusti Ostiensis or Portus Ostiensis. There are plenty of illustrations that depict the new harbour that had a substantial commercial and residential focus. 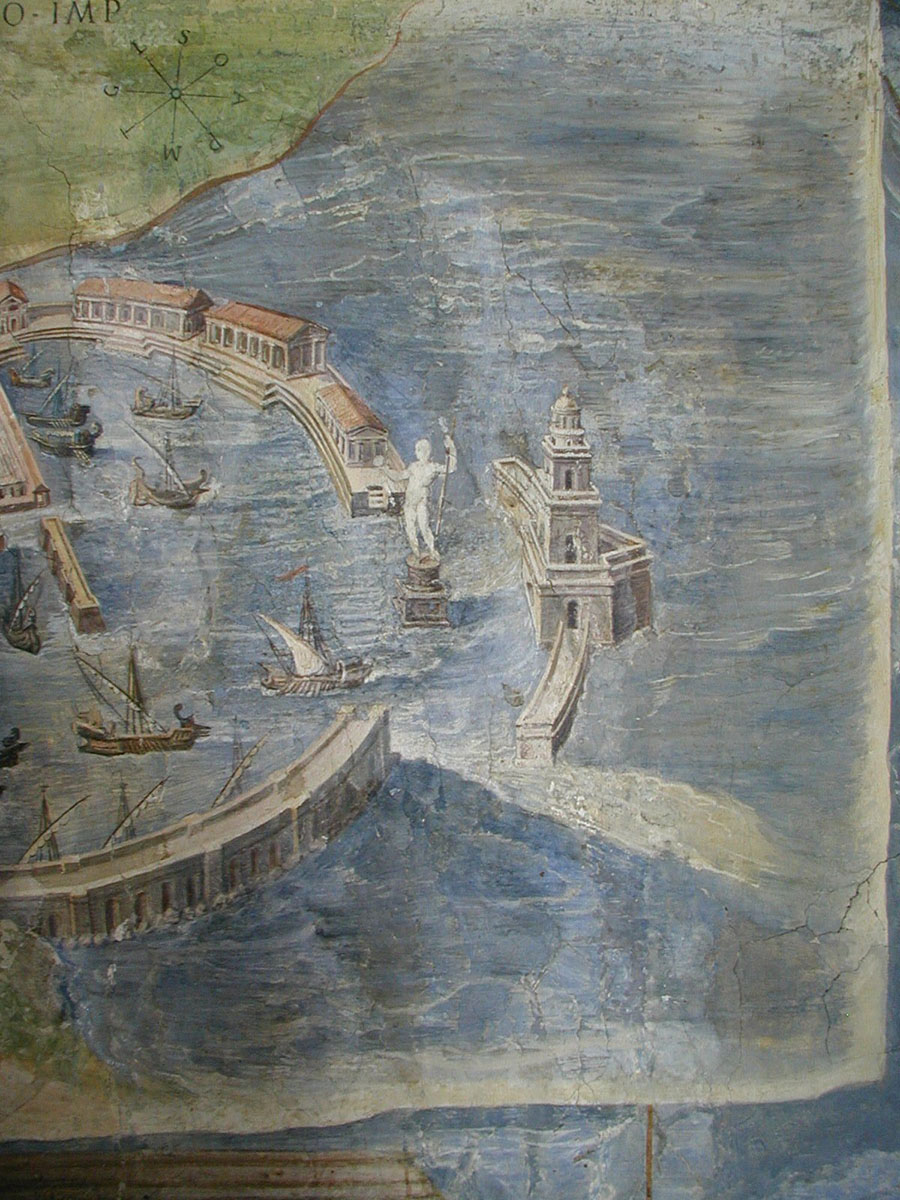 A close-up of the lighthouse of Portus Romanus [Ken Trethewey, 2003]

The same year, it is recorded that some 200 ships were lost in the harbour. It is thought that this was due to a tsunami caused by the violent seismic activity of Vesuvius, and may thus have been the reason why Trajan decided to create a new safe harbour inland of the first. This new hexagonal harbour was called Portus Traiani or Portus Traiani Felicis. The harbours of Claudius and Trajan together were called Portus Augusti et Traiani Felicis, but also Portus Uterque (Both Harbours).

During the first 150 years of its existence Portus was a district of Ostia. Constantine made it an independent city, Civitas Flavia Constantiniana, although it was usually referred to as Portus Romae or Portus Romanus. It had its own bishop in 314 AD. Over the centuries that followed, Portus suffered many severe actions at the hands of aggressors. The city was destroyed by the Goths in 408 AD, and by the Vandals in 455 AD. Portus was captured again by the Goths in 537 AD. In spite of this, it remained an important harbour, but by the eighth century, silt once again became a problem whenTrajan’s basin became inaccessible. In the ninth century there were further invasions by the Saracens, which led to the foundation in 842 of the fortified settlement Gregoriopolis to the east of Ostia, by Pope Gregorius IV. The last year the harbour was still in use is 879 AD, and by the 12th century, the Fossa Traiana was no longer navigable.

The land in this area has changed much since Roman times and it is difficult to readily identify where the original port lay. However, one clear feature is the famous hexagonal basin of Emperor Trajan, which was restored and filled with water in the years 1919-25. Today, it remains on private land and is seriously overgrown with very little obvious archaeological remains.

A detailed description of the archeaology of Ostia and PortusRomanus is given at: