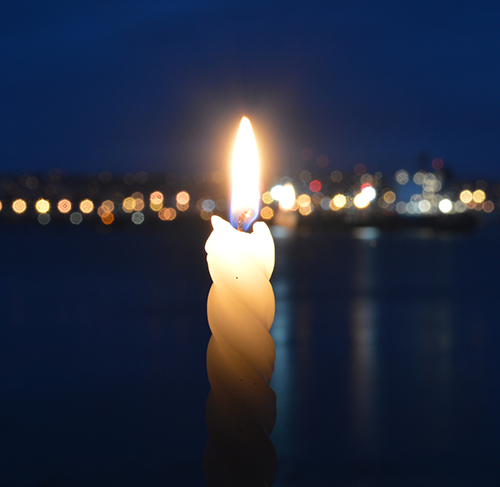 In early times, candles were used as a source of light to aid navigation. At first, the candle wax was mostly made of tallow - the fat derived from animals such as beef or lamb. Later, candles were made from other kinds of wax.

The principle of a candle is to create a solid stick of a combustible fuel having a low melting point. Many oils can be easily formed into waxes and are ideal for this type of application. A wick is included inside the stick of wax and protrudes from one end so that, when the wick is set alight, the flame causes the wax to melt and this, in turn, provides more fuel to keep the candle burning. As more was melts, the fuel soaks into the wick and is drawn towards the flame by capillary action, where it is converted into hot gases and light by the combustion process. Candles were undoubtedly used in many, many situations, most probably in small lamps used as harbour lights. Obviously, the low intensity of the light created by candles precluded their use in many major lighthouses, although it is surprising to note that Smeaton used the light from a mere twenty-four candles in his famous Eddystone lighthouse. The arrangement he used was similar to the one shown below. 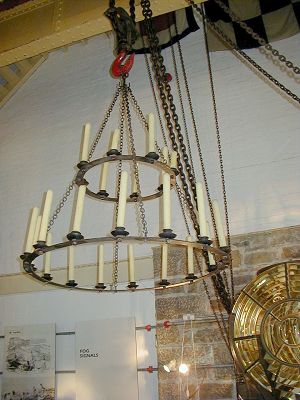 A replica of the candelabra used at the Smeaton Eddystone lighthouse.

The following material is reproduced from indicated sources.

The unit of measurement of light intensity was based upon a standard candle. This was one made from spermaceti, one sixth of a pound in weight and burning 120 grains of material per hour.

A wick is a material woven into cord, string or sheets of fabric that can then be incorporated into a burning device such as a candle or an oil lamp. The wick does not burn well itself, but soaks up a liquid fuel and aids evaporation of that fuel so that it can be set on fire and a light produced. Wicks of candles needed to be trimmed frequently so that they burned regularly and reliably. When they did not, the process was called, guttering.

In earlier times, when lighthouse keepers ran short of food, they were even able to eat candles because they were made at that time from digestible materials - tallow and beeswax. Later, candle materials were not digestible.

Candles were considered to be rather better than oil lamps in terms of ease of transport and storage of supplies, but candle lights were more expensive to maintain.

A candle-end was the stump of a used candle. It had significant value to those in service, including lighthouse keepers because they could be recycled for various other uses.

Candlepower is the old unit of light intensity used to measure the luminosity or brightness of a light. It was based upon the light given out from a candle of defined composition and rate of burning. At the Eddystone, from the commencement of operation of the Smeaton light until 1813 when oil was used, there were 24 candles weighing about half a pound each. About twelve inches (300 mm) in length, they were arranged in two circular tiers. Each candle gave the equivalent of 2.8 standard candles, making the total light intensity about 67 candlepower.

Snuffing was a practice of reviving the wicks of candles so that they burned more brightly, evenly and with less smoke. At Eddystone, the keepers had to lower the candelabrum (two concentric metal rings with equally spaced candle holders) so that they could snuff the wicks. If they did not raise the candelabrum completely afterwards, the lower tier of candles was not high enough to shine out properly from the lantern. This meant that the light was much reduced and complaints were received from seamen that the Eddystone light was not shining brightly enough.

The size of a lantern could be anything from a few inches (say, 200 mm) across to 12-15 feet (4 to 5 m). Lanterns provided at navigation lights to shelter candles were generally one to two feet (300 to 600 mm) in diameter and had translucent or glass panes let into the sides. It was desirable that, while they should have good ventilation, they should also be free from draughts that might play variably on the flames. It was not easy to meet both these criteria. [Chance fig15]

It is clear that when a simple candle or oil lamp was used in a navigation aid, much of the light was sent in directions that did not reach the mariner's eye. The idea rapidly grew that light that would otherwise not reach the mariner could be collected and focussed, making the light effectively brighter or more luminous.

A candelabrum is an open device to hold one or more candles in a position suitable for use as a light source. Smeaton's Eddystone was lit with a candelabrum of twenty-four candles arranged in two concentric circles and suspended from the roof of the lantern. The Candelabrum could be raised and lowered on a pulley to enable the candles to be maintained.

1445 For at least another 30 years after this date, a light is shown from a tower at La Rochelle, France. It was a round turret carrying a stone lantern of six windows surmounted by an elegant spire and containing a thick wax candle as illuminant. [Stevenson, 1959, p20]

1532 The Gollenberg light at Coslin in Pemerania is recorded as having several lamps or candles in front of a polished becken, a term which might apply to a plane or a concave mirror or glazed [Stevenson, 1959, p27]

1751 From the earliest times a lamp or candle stuck in the window of a house guided a man to his home and there are several instances in England before 1600 of lights being shown nightly from churches and other buildings to direct travellers over moorlands. A late example is Dunstan Pillar, or Lincoln lighthouse, which gave guidance across a heath between Lincoln and Sleaford. In 1751 Francis Dashwood erected this square tower 92 feet high, as a land lighthouse, and topped it by a lantern raising it another 15 feet. In 1810 a statue of George III was substituted for the disused lantern and this in turn was removed about 1940 as a possible danger to aircraft. This curiosity in lighthouses, being so far from the sea coast, offered no service to shipping. [Stevenson, 1959, p47]

1756 After the destruction by fire in 1755 of Rudyerd's lighthouse on the Eddystone Rocks, John Smeaton (1724-92) designed a tower in 1756 to consist entirely of stone, a choice of material resulting from a study of the advantages and defects of the previous Eddystone lighthouses. This stone tower, described in Section VIII, was the first to be exposed directly to the ocean, and was an achievement in construction much in advance of contemporary navigation lighting. Until 1810 its light came from merely 24 candles. [Stevenson, 1959, p49]

1759 Most importantly oil lamps required less work than candles of equivalent light intensity. With a large reservoir, they could be used for hours with little attenuance. However, smoke and soot would be created after a few hours if it were not adjusted. Smeaton tried oil lamps for the Eddystone in 1759, but was dismayed to find that the glass panes of the lantern soon became coated with sooty deposits because of smoke from them. He was forced to revert to his candelabrum.

1760 21 out of the 25 major navigational lights in Britain use coal, excluding Eddystone and two lightships which, by their nature, must use candles or oil lights. Of the six French lighthouse, four burned coal and one wood or coal. In Sweden, four out of six lighthouses burn coal. [Stevenson, 1959, p273]

1785 The harbour light at Dieppe consists of a one candle lantern. People complained that it was indistinguishable from the lights of ordinary houses nearby. [Stevenson, 1959, p272]

1794 Sir Benjamin Thomson, an American who had received the papal title of Count Rumford, announced that he had developed an oil lamp of Argand design producing 12 times as much light as one candle, but seven times was a nomal amount in most experiments. [Stevenson, 1959, p278]

1802 In 1802-3 Ezekial Walker proposed that illumination from a candle was dependent upon the material consumed by combustion; the faster this occurred, the better the light. He showed that if a candle was set at a 30 degree angle, the light burned more brightly, more material was consumed and snuffing was not required. 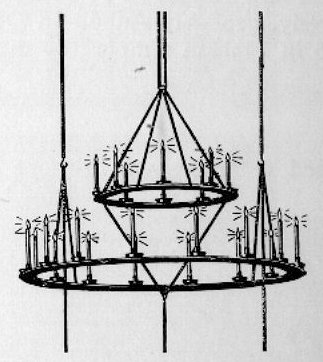 An image of the candelabra at the Smeaton Eddystone

1810 At the Eddystone, oil lamps and reflectors take the place of 24 candles weighing about half a pound each. About twelve inches (300 mm) in length, they were arranged in two circular tiers. Each candle gave the equivalent of 2.8 standard candles, making the total light intensity about 67 candlepower. [Stevenson, 1959, p272]

1819 About this time, most lightships showed either two or three fixed lights from candles or oil lamps in lanterns as the best distinction from the lights of other vessels, all under 5 candle [Stevenson, 1959, p281]

1820 The snuffless candle is created, but by this time, candles had ceased to be of significant use in lighthouses. [Stevenson, 1959, p271]

1820 A candle is a cylindrical solid of variable diameter made from a combustible oily or waxy material. Combustion is assisted by the presence of a wick through the centre of the candle. Snuffless candles were formed by dipping plaited wicks in chemicals. These were not invented until 1820 when candles had ceased to be of significant use in lighthouses.

1828 One of the Wintertonness lights was the last in Britain to use candles which were discontinued in 1828.

1959 By the modern system of evaluating light intensity Smeaton's original twenty-four tallow candles are estimated to have produced something like 67 candle-power. The introduction in 1810 of Argand lamps and catoptric reflectors raised the strength of the lantern to 1,125 candle-power. In 1845 a non-revolving Fresnel dioptric frame-rather like a glass bee-hive made up of prisms and lenses-stepped it up to 3,216 candlepower. In 1872 a better lamp increased the candle-power figure to 7,325. Only ten years later Douglass's first apparatus jumped the figure to 79,250. In 1959 the same optic was producing a beam of 358,000 candle-power. The Eddystone light had come a long way. [Majdalany, 1959, p199]