Q: What types of electric lights were used?

Incandescent light bulbs, such as those we commonly use in our homes, involve heating a very fine filament of wire - usually tungsten - to a high temperature, at which point the wire gives off a very bright light. The material used should have a significant intrinsic electrical resistance. Simple application of a high voltage to a very thin wire then causes intense heating in the wire and a very bright light results. The wire must be enclosed in a sealed, inert environment. All air is removed from the bulb and an inert gas such as argon is introduced to prevent the tungsten simply reacting with oxygen and catching fire. The tungsten is thus unaffected by the process which can be continued indefinitely. The main cause of failure of tungsten filament lamps is the speed of heating and cooling when the lamp is switched on and off. This results in thermal fatigue - the wire breaks because of repeated expansion and contraction and the bulb fails. 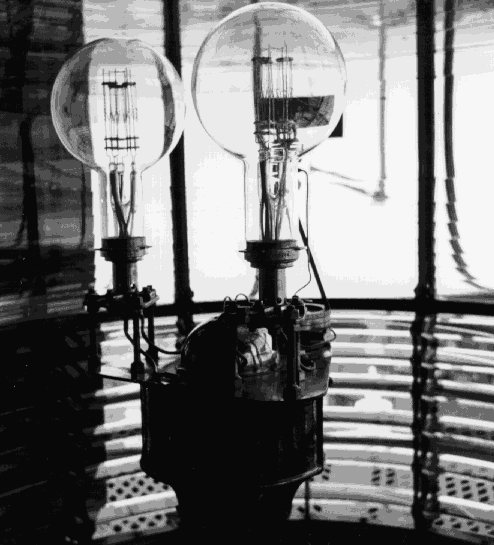 These two photographs clearly show the large incandescent light bulbs that have been used for many decades in the 20th century and still are in many lighthouses. The arrangement used is often triangular, with two bulbs at two of the corners (one is a spare in case of failure of the first). The third corner is occupied by a gas light that would be used in case of failure of the mains electricity when obviously both bulbs would be useless. 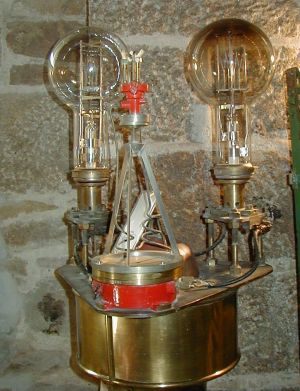 Q: Are there any other types of bulb?

Yes. There are several types of modern lamps containing mercury or halogen gases that work on a similar principle to the old carbon arc lights. In a similar way, a voltage is applied to two electrodes which results in a breakdown of the gases between the electrodes and a bright light from the discharge. This arrangement is more efficient in terms of applied voltage and brightness generated than the old carbon arc lights. One of the earliest uses of such a lighting system was at the new Dungeness lighthouse in Kent, England.