This video shows the rotating optic at the Longstone lighthouse, filmed in 2012. The optic consists of two pairs of lens and prism assemblies rotating about the electric light source. Each pair creates a single flash every 20 seconds. The total time for one complete rotation of the optic is 40 seconds.

In earlier times, optics were rotated on rollers and a large clockwork mechanism was fitted beneath the optic. If you have ever looked at some old "grandfather" clocks, they have weights that move vertically down on chains. As the weight falls, so the clock is driven and when the weight reaches the bottom, the clock stops unless the weight is wound back up to the top of its travel. So, just as you wind up a clock of this type at home, so the lighthouse keepers had to wind up their lighthouse optic clock with a large winding handle attached to the mechanism that was located immediately below the optic. Because the equipment was rather bigger than your clock at home, the weights were much bigger and the distance of travel was often the entire height of the tower, with wires used to support the weight. Sometimes the wires and weights were enclosed in a metal tube that ran vertically down the centre of the tower. The keepers might have to wind the clock up every 30 minutes or every hour and it was hard work!

When electric motors were invented, all this became redundant and the motors were able to turn the optic for as long as there was power to drive them. However, the roller mechanisms, though effective, still had friction in them which gave rise to larger forces necessary for rotation and lots of electrical power was necessary. So it was decided to float the optic in a liquid because, after all, ships are very heavy objects and they can be moved easily when they are afloat, but to do this, huge amounts of water would have been necessary at the top of the lighthouse. Instead, they chose mercury, a liquid metal that you find in small amounts in thermometers. This liquid has a very great density, that is, one litre of it weights over thirteen times as much as a litre of water. Because of this fact, it is possible to float a heavy optic in one thirteenth the quantity of liquid mercury than you would need to float it in water, and this is what was done. 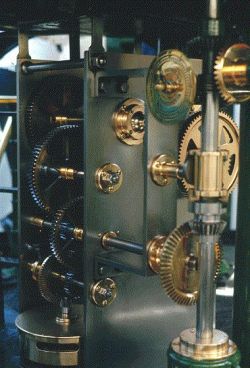 The photo above shows the clockwork mechanism that used to drive the optic at Trevose Head, Cornwall, UK. The clock was driven by a falling weight that had to be wound back up to the top of the tower at frequent intervals by the keepers. The mechanism was later replaced by an electric motor that needed no humans to keep it working. 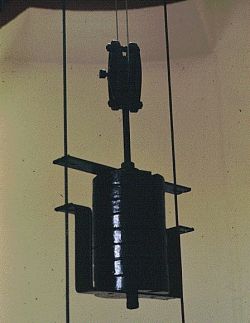 The photo above shows the weight which was in use at Withernsea, Yorkshire, UK, for many years. This one runs along two guide wires located on either side of the weight. 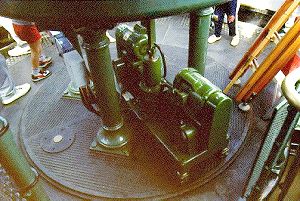 Above is an example of an optic driven by an electric motor. This was at Hartland Point, Devon, UK.